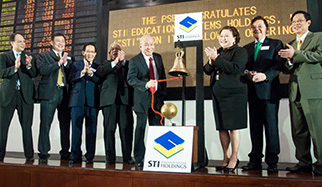 STI Holdings ("the Company") is the holding company within the Tanco Group that drives investment in its education business.  It is a publicly-listed company in the Philippine Stock Exchange and its registered address and principal place of business is 7th Floor STI Holdings Center, 6764 Ayala Avenue, Makati City.

STI Holdings, being a holding company, derives its revenues from dividends declared by its subsidiaries and interest income on short-term placements.

STI Education Services Group, Inc. ("STI ESG"), a Subsidiary of STI Holdings, and its subsidiaries, as educational institutions, derive its revenues from tuition and other school fees from its owned schools and royalties and other fees for various educational services provided to franchised schools. STI ESG has a total of 77 schools nationwide and is comprised of 66 STI branded colleges and 11 STI branded education centers.  Of these, 32 college campuses are wholly-owned, while 34 college campuses are operated by franchisees, 7 education centers are operated by franchisees, and 4 are wholly-owned education centers. STI ESG purchased STI Batangas from its franchisee in September 2013.

Apart from the STI branded campuses, iACADEMY has one campus in the Central Business District of Makati while DLS STI College has a campus adjacent to De Los Santos STI Medical Center.

STI ESG's college campuses offer associate/ baccalaureate degree and technical/vocational programs in ICT, arts and sciences, business and management, education, engineering, hospitality and tourism management, and healthcare. These programs are accredited by the Commission on Higher Education (CHED) and/or Technical Education and Skills Development Authority (TESDA). The education centers of STI offer technical/vocational diploma, certificate, and short-term courses for computer programming, computer technology, software applications, and office administration, among others. The programs in the education centers are also accredited by TESDA.

The acquisition is part of the planned expansion of the Company.  It also widened its course offerings at the tertiary level.  It provided STI Holdings another entry into basic education which is the focus of the government's K to 12 program, and into the graduate school level which is vital in updating the development of human capital in the country.

At the time of acquisition, WNU had 5,075 students in all three levels, that is, basic education, tertiary and graduate school. As for SY 2014-15, WNU showed improvement as it registered 5,080 students and an additional of 1,386 students from the acquired STI Bacolod franchised schools, thus increasing the number of enrolled students to 6,466. This generated an increase of 29% compared to previous year\'s total student population. The University's 3.1 hectare campus is situated in the center of Bacolod City in Negros Occidental.