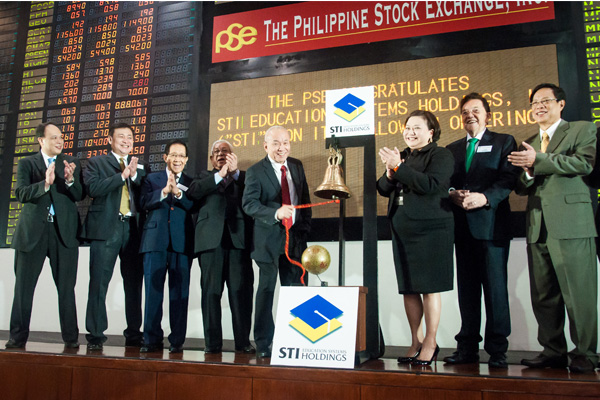 Ms. STI 2012 2nd Runner-up Joressa Babanto from STI College - Muñoz-EDSA led a moving invocation at the opening of the listing ceremony, which was immediately followed by a breathtaking performance from the STI College Olympians Pep Squad.

Hosting the ceremony is Magic 89.9 disc Jockey and courtside reporter Jessica Mendoza who graced the trading floor with her charming and lively persona.

The listing ceremony was concluded with the ringing of the opening bell, a time-honored tradition at the Philippine Stock Exchange that signals the beginning of each trading session, and now a symbol of achievement for the STI community.

With its Philippine stock market launch, STI opens a new chapter as it opens its doors to new investors to help make real life education more accessible to students from different parts of the country and encourage more young Filipinos to achieve their full potential.